From the Daily Caller:


The Patriotic Millionaires, a group of millionaires who believe that government should increase the tax rate for millionaires, released a video calling on congress to raise their taxes.

The group, organized by The Agenda Project, seeks to end the Bush Tax Cuts that Obama extended last year, saying that it is unfair to give tax cuts to people in the highest income bracket.

“You decided our country needed less money, and millionaires like me needed more,” says the script of the video, read by a series of millionaires who signed the original petition.

“Less money for roads to transfer our products, for high speed internet to build our technology companies, for science research, education, for universities, and research to spark our innovation,” they say.

A series of millionaires explain how the government, or government funded entities like public schools, have contributed to their success.

“Tax me,” one concludes, “because my country, our country, means more than my money.”


I have a sneaking suspicion that Ralph Nader is behind this. Why? This is straight out of his book, "Only the Super Rich Can Save Us!" The name, and everything. If you haven't yet, pick up a copy. 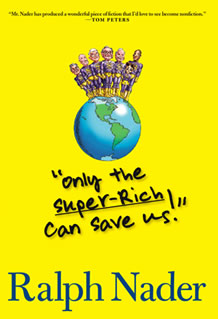 Shouted into the void by The Punk Patriot at 12:19 AM

Email ThisBlogThis!Share to TwitterShare to FacebookShare to Pinterest
Labels: Only The Super Rich can save us, Patriotic Millionaires, Ralph Nader