Reproductive Rights in a State of Emergency

This Wednesday marked the 41st anniversary of the Roe v. Wade Supreme Court decision, which protected a women’s decision to have an abortion was marked by thousands of anti-abortion activists taking part in a march for life in Washington, D.C. Carrying signs saying “I AM the pro-life generation”, and “conceived from rape, I love my life” marches converged on the National Mall Wednesday and marched to the Supreme Court.


While public opinion on abortion has not shifted much since the 1970s, the war on female reproductive rights, which was raging at a fever pitch in 2013, continues to escalate.

A 2013 Gallup poll showed that “52 percent of Americans support access to legal abortions under certain circumstances, with 26 percent holding it should always be legal and 20 percent in favor of an outright ban.” Those numbers have shifted little in a generation.

However, as Sunsara Taylor of Stop Patriarchy, points out Reproductive rights are in a state of emergency.

“2013 was another record year of assault on abortion and birth control:
In 2013 alone, 22 states passed 70 new restrictions including late abortion bans which defy Supreme Court precedent, unwarranted doctor and clinic regulations, limits on medication abortion and bans on insurance coverage.


FIVE states have only ONE abortion clinic and in 2013 more clinics were forced to shutdown abortion services including almost one-third of clinics in Texas alone. 97% of rural counties have no abortion provider.


A homegrown American Christian-fascist movement of anti-abortion fanatics continues to threaten and harass doctors and patients outside clinics across the country.”


Sunsara Taylor is the interview guest on this edition of The Resistance Report.

Sunsara writes for Revolution Newspaper and is an initiator of the movement to End Pornography and Patriarchy: The Enslavement and Degradation of Women at StopPatriarchy.org 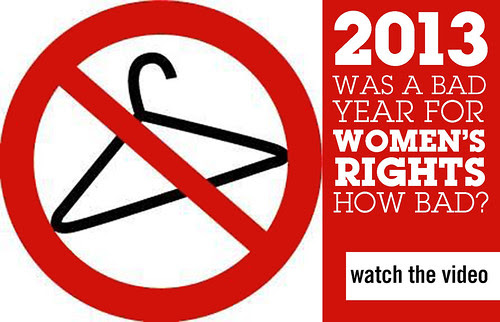 Shouted into the void by The Punk Patriot at 5:45 PM