I am not sure what it says about our culture when six figure speaker fees are awarded to War Criminals, but that is what happened in New York City on Monday, January 13 when George W. Bush took a break from his retirement and rigorous painting schedule and took his Texas swagger on stage as the keynote speaker at the National Retail Federation’s Big Show.

Outside, about 30 protesters, armed with art from We Will Not Be Silent's word project tried to draw attention to the fact one of the worlds most infamous war criminals was inside, plying his Texas charm instead of spending time in a jail cell where he belongs.

The small number of protesters was disappointing and begs the question, should we simply let bygones be bygones?

We do, after all, have a new President who has, in many ways, escalated the blow back inducing homicidal bull in a cultural, religious and geopolitical china shop of a foreign policy pursued under Bush. In light of this fact, we would do well to ask ourselves if the limited resources of the greater activist community would be better spent on activities other than trying to hold W to account. I feel strongly that we should continue to hold Bush accountable, and 4 reasons why are outlined in this video.

I’m sure you could help me add to this list. 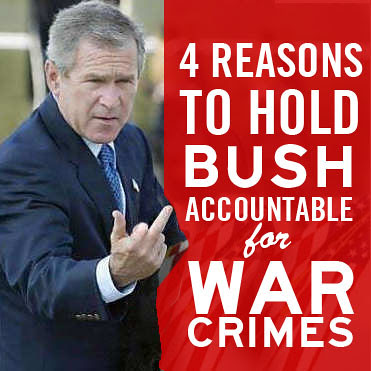