So the New York Times is reporting, as though it's a revelation, that the NSA has been collecting our social media data.

To which I have to say, um, no fucking duh!

For those who have been paying attention to this issue since the USAPATRIOT act first passed, or when the Total Information Awareness Office was formed, this "recent revelation" is nothing new. Of COURSE they are slurping up all of our social media meta-data, and running it through predictive behavior models to try to root out "crime thought." That's what they set out to do originally.

Big Retail stores like Target already uses this sort of data to predict things like what sort of toothpaste you are most likely to buy, and then send you an ad in the mail for that toothpaste. 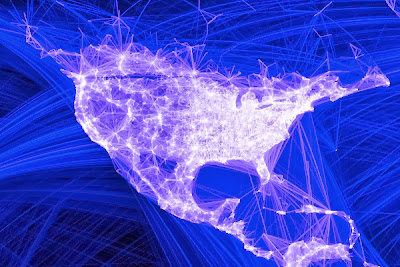 As Derrick Harris says over at Gigaom.com:


Google, Facebook, direct-marketing firms and even grocery stores? Well, they know a whole lot about what we buy, where we go online and who we talk to. I’m confident most of this data is just used to train models and then lump me into a particular segment that computer systems can use to automatically present with ads or coupons, but a bad actor with access to my data could do some serious cyberstalking.

And check this out from Forbes magazine:


Every time you go shopping, you share intimate details about your consumption patterns with retailers. And many of those retailers are studying those details to figure out what you like, what you need, and which coupons are most likely to make you happy. Target, for example, has figured out how to data-mine its way into your womb, to figure out whether you have a baby on the way long before you need to start buying diapers.

Charles Duhigg outlines in the New York Times how Target tries to hook parents-to-be at that crucial moment before they turn into rampant — and loyal — buyers of all things pastel, plastic, and miniature. He talked to Target statistician Andrew Pole — before Target freaked out and cut off all communications — about the clues to a customer’s impending bundle of joy. Target assigns every customer a Guest ID number, tied to their credit card, name, or email address that becomes a bucket that stores a history of everything they’ve bought and any demographic information Target has collected from them or bought from other sources. Using that, Pole looked at historical buying data for all the ladies who had signed up for Target baby registries in the past.

While the TIAO (or rather, the TIA and the IAO) were defunded, only an idiot would think that the military intelligence aparatus would just abandon their plans. They just moved the budgets around.

Now, I'm not saying that Facebook *is* the TIAO, but it did launch in 2004, just one year after the TIAO lost funding in 2003. Not only that, but Facebook indirectly received funding from DARPA:


So please remind me exactly what the big revelation is?

I feel like I'm the only one who realizes that they've been doing this shit for some time now. This isn't anything new, it's the same fucked up police state, 1984 shit that they started nearly a decade ago under George W Bush.

Why have we failed to notice?

Shouted into the void by The Punk Patriot at 7:28 PM