So This Is America...

I just learned through friend, former colleague, and current head of New Hampshire Peace Action, Will Hopkins, that 71 year old former CIA intelligence analyst Ray McGovern was arrested and brutalized for wearing a Veterans For Peace t-shirt at a speech by Hillary Clinton.

The irony is, of course, that her speech is on the subject of oppressive governments who beat and shoot protesters.

Now, you're probably thinking, "well shit, he must have been screaming and yelling like a Code Pink lady to get hauled out, right?"

By the account over on JusticeOnline.org he did nothing but wear a t-shirt.

So this is America:

Said Will Hopkins, "[I] just watched the video of two cops roughing up Ray McGovern at a Hilary Clinton event. Made me ill. [I] don't even want to admit that the administration I helped get elected is so callous and brutal. It's Ray McGovern, he's 71 and devoted his whole life to this country. A more honest and true patriot there has never been, and for standing and turning his back quietly on the brutality of our nation, he was beaten and thrown in jail."


According to JusticeOnline.org's report, he was then roughed up by police. The guy is 71 years old for fuck's sake. Is it really nessecary to rough up an old man? According to McGovern's attorneys he was left bruised and bleeding in his jail cell.

So this is America.


In order to export Democracy and Freedom overseas, does that require us to disassemble it here at home first? 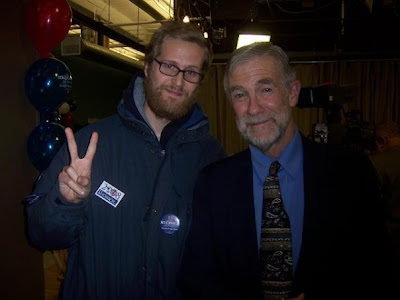 A more full account of the events from VotersForPeace.org is here:
http://votersforpeace.us/press/index.php?itemid=4666
Shouted into the void by The Punk Patriot at 12:22 PM