Last week, Obama supporters created a "Get FISA Right" group using the Obama campaign's web-based social networking application. The group was an unusual addition to the website -- formed as it was by Obama supporters for the purpose of protesting Obama's position on the FISA bill recently passed by the House and currently under consideration by the Senate.

The group became the largest one on the Obama website within days, growing to more than 21,000 members in less than week. The Obama campaign, in response to this unprecedented online gathering, likewise did something unprecedented -- it posted a response to the group on the Obama blog. The campaign also made three policy staffers available to answer questions (live) in the blog comments section for nearly two hours.

Responding to the comment section dialogue, Will Mitchell, a representative of the FISA activist group, today hand delivered a formal letter to Obama campaign headquarters in Chicago. The group also published their statement on a handful of blogs Monday and Tuesday. 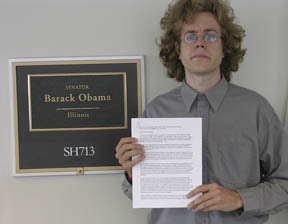 The response asked Obama both to reconsider his decision to vote for the FISA bill and to ask him to speak on the floor of Congress:

We ask that you back up your words with action by addressing your constituents on the floor of the Senate with the same oratorical power you used in Philadelphia to lay out your vision of a 'More Perfect Union.' The American people have just as much right to know of the dangerous precedent this Congress would be setting by granting retroactive immunity to those who "may have violated the law" and allowing spying on law-abiding citizens .... We ask you to reconsider your current position on the bill as a whole and strongly oppose a bill about which you said, "I know that the FISA bill that passed the House is far from perfect. I wouldn't have drafted the legislation like this, and it does not resolve all of the concerns that we have about President Bush's abuse of executive power."

In your statement you also wrote, "In a dangerous world, government must have the authority to collect the intelligence we need to protect the American people. But in a free society, that authority cannot be unlimited." We agree.

The statement also reminded Obama that they, as strong and fervent Obama supporters, are answering the very call to action that Obama asked them to answer:

We appreciate your willingness to continue the discussion. We represent a large and vocal part of the movement you have nurtured and that has nurtured you during this campaign season, and include many of your most active and ardent supporters. As you have said time and again Senator, "we are the ones we have been waiting for," and we are here, working to bring about real change in Washington. We have grown to over 20,000 strong in the space of just a few days.

The statement itself is an example of the online social networking phenomena that the Obama campaign has fostered. The statement was created on a wiki and edited by more than thirty members of the group. It was released only when consensus was reached among the members who volunteered to draft and edit the statement.

In just one week, the group has created the largest group on the Obama website, their own GetFISAright.com website, an online discussion forum, a FISA activist wiki, a very large Facebook group, and many other online projects. The group is also already organizing to continue fighting after the Senate vote on Wednesday, and the group has plans to organize all of their disparate online organizing tools into a coordinated campaign over the long term.

Shouted into the void by The Punk Patriot at 10:28 PM