Youtube user LowEndLobster purchased one of these for a review, and after experiencing similar issues, took the pickup apart, and lo and behold:

So, I gotta write this review for the Gretsch G2220, regarding both the warranty and the pickups.

I purchased this model from Musician's Friend last year, and the pickups buzzed like crazy, they were clearly not humbuckers.
I figured that this was just a QC oversight and that Gretsch (owned by Fender, which becomes important when getting into the warranty side of things) would be happy to find out about this so that they could get this massive oversight under control.
I took it to an authorized Fender tech, and the pickups were not dual coil humbuckers, they weren't really single coils either.  They were what can only be described as garbage.

For reference, this is what a firebird-style, dual-coil humbucker is supposed to look like (from StewMac): 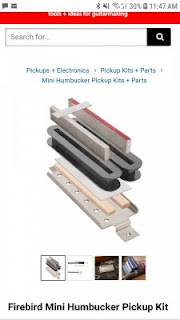 You can see there are two rails, and two bobbins for the coilwire to be wrapped around, and then the two magnets behind the rails.  Two coils, opposite polarity and windings, creating a humbucking circuit.  Okay?  Ok.

THIS is what came installed in the G2220.  This is the neck pickup.  It was labeled "Bridge" along with the bridge pickup, which explained why it was so much louder in the middle position... but the 60hz hum was ALSO louder. 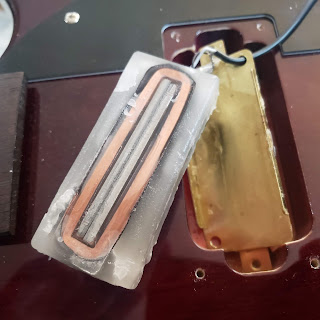 You can see it has two rails, like a firebird, but there are no bobbins to wind the coilwire around, the pickup is just a single massive coil of copper around two rails.  This is supposed to be a "dual coil" humbucking pickup?

Where is the second coil, exactly?  What is this trash?

The first Fender tech I took it to, (about a year ago) tried to convince me that this was a stacked humbucker, like the Fender Noiseless pickups they produce for Strats and Teles.

I asked him if that was the case, why they buzz like single coils.  He said "maybe they are humbuckers that are just not humbucking."

So... that's not a thing though.  If they are humbuckers, they buck the hum, because of the way that the magnets and coils interact to enhance the signal and cancel out the radio inducted noise frequencies using constructive and destructive interference patterns.  It's a physical property of the device due to the arrangement of physical parts, not a switch that you can just flip, and not something that turns off and on.

So, anyways, after much stalling and hemming and hawing, The Fender tech said he would put in a replacement order with Fender.  Months passed, I kept checking in, and he kept saying that they weren't getting back to him.  Now, I think this was bullshit and Fender was just trying to run down the clock on their 1 year warranty they offer on their electronics.

I repeatedly contacted the Fender Customer Service to ask why they weren't getting back to the Fender tech, and they basically called him a liar.  Was he lying?  I think now that they were playing bad cop worse cop, again, to try to run down the clock on the 1 year warranty.

Eventually after about 4 months, I had to move, and so I asked for my bass back.  The first thing I did after arriving in the new city was get my bass into a different certified fender tech, in accordance with their warranty.

This time, things would be different right?  I shared my story up to this point with the new Fender tech, and he informed me that Fender was very sorry about all the problems I had had with the last tech, and that they would get right on my case, sending out a replacement bass, as well as installing new dual coil humbucking pickups.

And then nothing happened.

Instead they went back on their word and began trying to gaslight me.  There was no replacement bass coming in the mail, there were no replacement pickups coming, they kept telling me that this product was supposed to come to with these garbage single coil pickups, and that if it was placed in the middle position, it would be in "humbucking mode"--As though I was a child who knew nothing of how electronics work.
It's especially rich for the fact that BOTH PICKUPS ARE THE SAME POLARITY.
There was no "humbucking mode"!!!
Turning on both pickups just created two same-polarity pickups acting essentially as one giant single coil.
This is a compound lie-- first the lie that two single coils are supposed to come in this model (when it is clearly listed everywhere as having to dual coil humbucker pickups) and second, that when they are both on that they would cancel out the hum.  That's a feature of single coil instruments like strats and teles.  But those don't have two same-polarity pickups.  This G2220 had two bridge pickups, which only compounded the single-coil noise.  So they are just lying upon lying.
I told them that was bullshit, that they were liars and must think I was stupid, and they needed make good on their warranty because they are engaging in false advertising which is a federal crime... So then they kept saying they would replace the pickups, but months went by and nothing ever happened, and then every time I asked about it, they made me start my warranty claim over again.
Eventually as we were coming up on the one year mark, I told them they were engaging in false advertising and were liable to have a lawsuit brought against them.  They agreed to reimburse me for the full amount of the purchase.
But then they didn't send the check.  They had me surrender the bass, had the Fender tech saw the headstock off the bass, and then didn't send the check.  And I would ask about it, and they would tell me that it was being processed.  Weeks went by.  Then months.
Eventually I told them that I had no choice left and would be pursuing legal routes. It was only after I contacted the Maine Attorney General that they finally cut the check, gave me a date for when it would arrive, and sent it out.
The Gretsch/Fender warranty is worthless. I would not buy any of their products, they engage in shoddy workmanship and then lie through their teeth to cover it up.
Shame on them.
Shouted into the void by The Punk Patriot at 2:18 PM