The Transportation Security Administration, under scrutiny after last month’s bombing attempt, has on its Web site, a false “mythbuster” to reassure the public.

From the New York Times 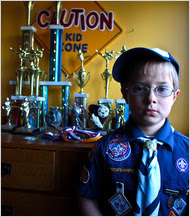 “Meet Mikey Hicks,” said Najlah Feanny Hicks, introducing her 8-year-old son, a New Jersey Cub Scout and frequent traveler who has seldom boarded a plane without a hassle because he shares the name of a suspicious person. “It’s not a myth.”

Michael Winston Hicks’s mother initially sensed trouble when he was a baby and she could not get a seat for him on their flight to Florida at an airport kiosk; airline officials explained that his name “was on the list,” she recalled.

The first time he was patted down, at Newark Liberty International Airport, Mikey was 2. He cried.

After years of long delays and waits for supervisors at every airport ticket counter, this year’s vacation to the Bahamas badly shook up the family. Mikey was frisked on the way there, then more aggressively on the way home.

“Up your arms, down your arms, up your crotch — someone is patting your 8-year-old down like he’s a criminal,” Mrs. Hicks recounted. “A terrorist can blow his underwear up and they don’t catch him. But my 8-year-old can’t walk through security without being frisked.”

It is true that Mikey is not on the federal government’s “no-fly” list, which includes about 2,500 people, less than 10 percent of them from the United States. But his name appears to be among some 13,500 on the larger “selectee” list, which sets off a high level of security screening.

At some point, someone named Michael Hicks made the Department of Homeland Security suspicious, and little Mikey is still paying the price. (His father, also named Michael Hicks, was stopped for the first time on the Bahamas trip.)

Both lists are maintained by the Terrorist Screening Center, which includes the Federal Bureau of Investigation. They are given to the Transportation Security Administration, which in turn sends them to the airlines.

A spokesman for the T.S.A., James Fotenos, said that as a rule, “there are no children on the no-fly or selectee lists,” but would not comment on Mikey’s situation specifically.

PunkPatriot says: Also, the USA has never tortured prisoners...
Shouted into the void by The Punk Patriot at 9:18 AM